I just watched a great Swedish movie "As it is in Heaven"
it was about ordinary people finding their voice.

The climax of the movie was great- I won't tell you in case you decide to see it
but it made me think about what I have been trying to achieve in our Thursday Evening Painting Workshops.

Ordinary people trying to find their voice, their niche. Last night Gay Summer Rick
announced her solo exhibition and I was humbled by her acknowledgment of my influence
of the night I handed her a palette knife and took away her brush.

Beautiful paintings- don't miss it!
Posted by Cheryl Kline at 1:45 PM No comments:

Wednesday Night Quick Sketch with
Esmeralda Acosta!!
Quick Sketch is a great way to understand form in a simple approach. Based on gesture and shape one learns to interpret and design what they see. Many are the uses of this discipline, from Fine Art figure work to projects in the game and concept field. All require efficient figure drawing skills, and QS can facilitate the editing process of the human form. Esmeralda's approach incorporates a synthesis of experience from a lifetime of study. All it takes is direction and dedication. Esmeralda is a master and will demonstrate step by step----this class fills up fast- so call to day to reserve your space Today!!!
Starts June 1st, Tuesday -- 7:00 to 9:00pm
$50 per class
or
Save 10% when you pay for the entire 5-week session for $225.
Pass this along to your art pals
If you like what we do, and like what we have taught you...
the best way to thank us is to refer a friend
KLINE ACADEMY of FINE ART
www.klineacademy.com
3264 Motor Ave, LA 90034 (near National)
(310) 927-2436
Posted by Xavier at 3:55 PM No comments:

We have exciting new classes starting in June.
Quick Sketch with Esmeralda Acosta begins Wednesday nights on June 1.
Scott Yeskel will rejoin us on Monday night and Tuesday days with his Abstract Painting Workshop beginning June 13th and 14th.
Grigor C. will be teaching Florentine Style Figure Painting on Tuesday nights starting June 14th.
We also have a brand new class starting up Mid-June with Regina L.- Renaissance Atelier. Stay posted for more info on this class in the next week or so....
Hope to see you all soon here!
Posted by Cheryl Kline at 1:12 PM No comments:

Let us Inspire You...

More on The Opaque Palette

The opaque palette was introduced to us last month by Jan Saether during a portrait workshop at Kline academy. Personally I am pretty set on my combo- Florentine/"California Caravaggio" palette which I have developed over the years but I am always up to a challenge to try new techniques and then try to make them my own by figuring out what works for me and what does not.
Last week I started this portrait of Steve using the opaque palette ideas.
Step one:
was to cover the canvas with mars brown and then draw the head in using mars brown (I added touch of black in order to see the drawing). Once I was happy with the drawing, I began working in the lights with Naples Yellow- Italian by Williamsburg.
Step two: 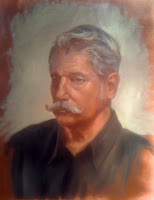 After 3 days of drying, yes, these opaque colors take much longer to dry which is a bit of a pain, I moved on to a limited palette. In Jan's workshop, he had us only using mars red light the second time but I really felt it was too redundant to work a second day with only Mars Brown, Naples and a bit of red, and especially - the palette is way too warm and I want to differentiate temperature early on. So, I added to that palette on the second day Nickel Yellow, Mars Violet and Black. That way I could easily get some warm and cool tones and get closer to a natural skin tone.
Step three:
You won't see a huge difference yet --- 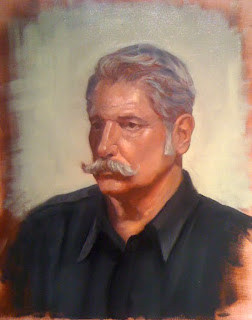 but on step three I re-in-forced what I was doing in step 2 and tried to build up the lights and get a little more detail. I am still not sold on the very first part where we cover the entire canvas in mars brown and paint into it wet. I feel like I am struggling to get my lights lighter because of this under painting. On step four I will add the rest of the palette -- Chrome Green, Vermillion, Yellow Ochre and White. But I have to admit that I am amazed at what I could get by using a limited palette of:
Nickel Yellow, Naples Yellow Italian, Mars Red Light, Mars Violet, Mars Black. Thats it. 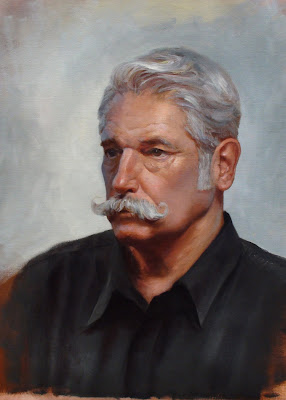 Okay so the last day on the opaque palette painting I added my choice colors to do the finishing touches:
Glazing with Ultramarine, Alizarine crimson, Transparent Red Oxide. Then to my palette I added
Yellow ochre, Vermillion, Chrome Green and Titanium white. This allowed me a full range of colors and ones that I am more used to painting with ..along with the all the mars colors.

I found that the final image takes less time to finish because the form is so well worked up with all the base tones. Most of the colors on my typical palette are either semi opaque or transparent which is why the struggle in the beginning to bring up the values. With the opaque palette in the beginning stages you build the foundation (but have to wait longer between layers to dry because mars colors are more oily). In my painting - I chose not to use Jan's medium with the wax and stand oil or stick to the tedious layering of mars brown and naples yellow for 2 days and then only adding red on the second day. Instead. I cut to the chase and added a fuller palette to achieve warms and cools in the beginning. There are some other minor modifications I will make to this approach. On the next portrait I will let you know, but overall I must say that I am pleased with my painting of Steve. 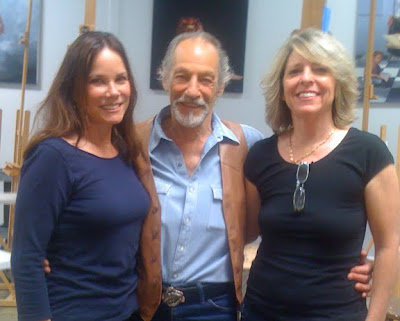 David Leffel and Barbara Hershey visit with Cheryl Kline at Kline Academy.
Today was a wonderful day. Barbara Hershey (yes, the awesome, beautiful actress) brought her friend David Leffel to my studio today to discuss the possibility of doing a portrait workshop and live demo. Hopefully I will have some good news for everyone soon with a workshop announcement dates, etc with this masterful artist, David Leffel. (Isn't he dashing?) I could have talked to them for hours. I will keep you posted.
Posted by Cheryl Kline at 4:43 PM 2 comments:

Check out the new Kline Academy Brochure Guide and
be the first to pick one up at your local Los Angeles Art store! 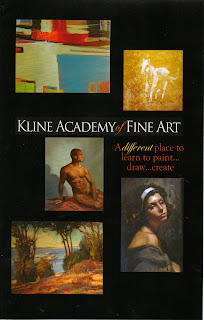 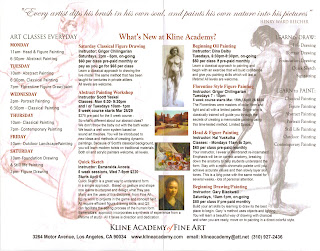 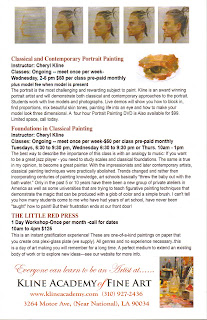 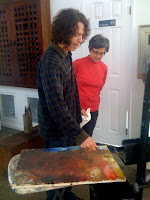 In this article we discuss Hal Yaskulka's impressive consultation of painting the human figure at Kline academy, And how a student should approach to painting the figure on the first day of this workshop. One of our veteran students Tamara Smith entered the Monday morning figure painting class to further enhance her skills. For her painting, Hal encourages Tamara to patiently draw in figure before painting. This will allow the artist build a solid foundation catering to form and gesture.
Step one: 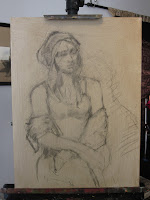 Hal Instructs Tamara to lightly tint the canvas with acrylic raw umber, This will disband the frightful intimidation of white blank canvas. Which can become a downfall for most artists. Tamara then draws in the figure with a long willow charcoal stick. this type of material allows the the individual to easily erase any drawing mistakes they happen to make on the canvas. 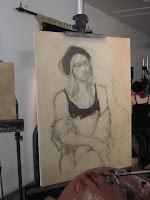 Lightly brushing the willow charcoal drawing with a chamois and sealing it with hair spray. Tamara sets up her palette consisting of Titanium white, Yellow ocher, Vermilion, Quacinidrone red , Red oxide, Alizarin crimson and Ultramarine blue. Tamara goes in to painting in the figure by placing in the darkest dark.
Notified by her hat and dress. Color combination of red oxide and ultramarine. 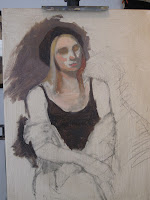 Step four:
Hal then helps Tamara to find the the background color by adding a violet combination of Alizarin, Ultramarine, White and Red oxide. Hal then paints in the local skin color mixed with ocher, white, vermilion and Alizarin. As you can see these colors of are closely related to each other and with an overall violet atmosphere that is what we want for the this painting.


Take the figure painting course every Monday morning from 11 am - 2 pm . A $60 class, Pre-paid monthly.
Learn to paint the figure with confidence with this classical approach to finding porportions, gesture and beautiful skin tones. Emphasis will be on correct anatomy, breaking down the anatomy to help students understand the form. Hal is an award winning artist who has sensitive touch and classical layering techniques.
KLINE ACADEMY of FINE ART
www.klineacademy.com
Los Angeles (Culver City), CA 90034
(310) 927-2436
(It is above national blvd. lots of free parking under the bridge)
Posted by Xavier at 1:56 PM No comments: