Yesterday at Kline academy, a new session began for the figure painting class which will last for 4 weeks. Instructor Hal Yaskulka makes headway for a brand new demo. Showing his simple yet effective step by step process, Yaskulka masterfully shows us how to paint the human body in this first demo. 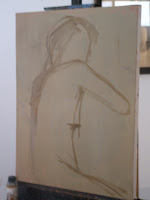 Hal starts off by tinting the canvas with a thin mixture of acrylic paint, white and raw umber. After letting the paint dry, he then paints a basic out line of the body with raw umber. The idea behind this approach is to describe the form in straight angles. In addition, Hal show’s the direction of body at a certain angle, giving the figure a thrust of direction. Also to be noticed, he distinguishes the outline of the body with geometric shapes such as triangles, rectangles and cylinders. 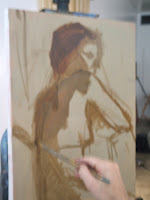 After identifying the body Hal continues by adding the darks, and at the same time distinguishing the negative and positive spacing on the surrounding figure. Like most of his paintings, Hal adds the darks to the hair first. Rule of thumb, in a figure painting the darkest dark starts with the hair (unless they are blonde). From there, he can start ruling out what will be the color relationship of the background compared to the hair. He then moves on adding darks to the rest of the body by thickening the raw umber and adding a bit of raw sienna. Hal tends to paint the shadows in a abstract manner. The out line of the shadows is formed with straight angles. As for the negative and positive spacing, he places a shadow beneath the arm and makes certain areas darker than others. Thus, giving dimension to the entire form. 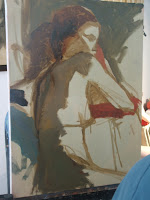 After making a noticeable feature of the figure, Hal begins to lay down the color. For this demo, Hal's palette has Titanium White, Naples yellow, Yellow ochre, Raw Sienna, Burnt Sienna, Napthol Scarlet (Vermilion) , Rose matter (Alizarin Crimson), Raw Umber, Cerulean Blue Hue and Ultramarine Blue. At this point Hal begins focusing on color relationships between the body and the back ground. Still focusing on the darks, Hal's point of origin is the head. From here, he begins by adding a greenish cool hue to the back ground, then a reddish sienna to the shadow of the head and keeping a similar color to the hair to offset it, carefully he blends both into each other. He then moves on coloring shaded areas of the body, which of course has a similar color relation ship to the back ground and the surrounding area. 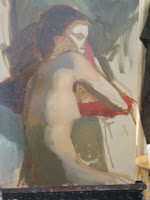 The final step for this part of the demo Hal emphasizes the halftones continuously because the halftone is what bridges the gap between the dark and light and by oning in on this method, it helps a painting to gain a sense of realism. Hal begins to thicken the paint. The areas he begins to thicken are the flesh tones, in addition; by thickening the paint he begins to brighten certain parts of the body by adding a contrasting relationship between the cools and warms. Lastly, Hal adds a variety of hard and soft edges. By doing so, the painting begins to have dimension. Soft edges push a section of the painting back and a hard edge brings it forward. 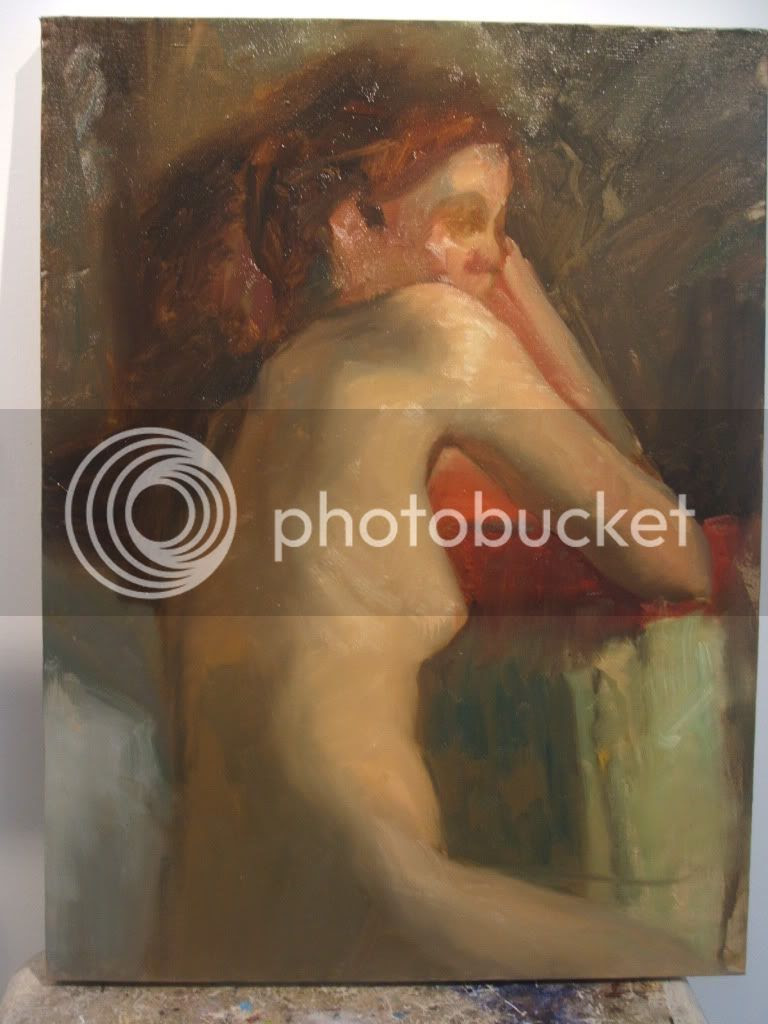 It was a very informative demo. If you would like more information on Classical Figure Painting with instructor Hal Yaskulka, Mondays 11am to 2pm, long pose, call Kline Academy at (310)927-2436, limited space, all levels welcome.