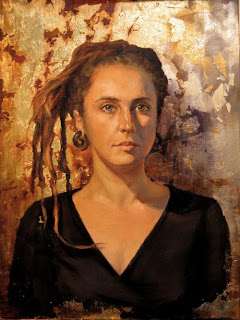 Over 800 artists from around the world attended. The days were filled with lectures and demonstrations from the most renown portrait artists living today.

On Saturday, Everett Raymond Kinstler gave an incredible lecture. He talked about the fact that most great portrait artists all painted other things besides portraits. And how important it is to explore nature from life. Most of the great portrait artists (Sargent, Zorn, Boldini, and others) used only 5 to 8 colors to create their masterpieces!

"When you paint hair, make believe you have a comb in your hand."
He gave many other gems while creating this study:

"There are no short cuts"

"All art is feeling"

"Be careful of cleverness"

Burton Silverman followed with this demonstration of a model which he painted in about 2 hours!

Burt began over an old paint as his underpainting, "it causes you to be zoned in and more focused" 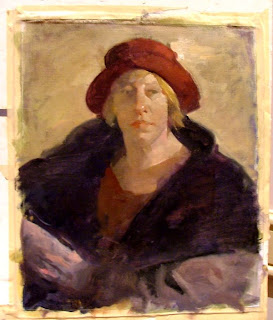 He started drawing (with paint) with a reddish brown and alizarine very dry paint as an outline to set up the composition on the canvas. Like magic, the figure began to appear. He made a point to keep the shadows transparent (thinned with oil) and many times wiped out the area after applying the paint to actually stain the area with a hue. Then he started the half tones in the face and added the warm color on the nose then the highlight. He worked very fast and slowly built up the impasto highlights. The blond hair was achieved with a reddish undertone and then put the highlights on top.

On Saturday afternoon, Aaron Shikler spoke for an hour about his life as an artist. What a character, all of these speakers had stories to tell about presidents and royalty they painted.

David Leffel closed the day speaking about "finishing' a portrait". 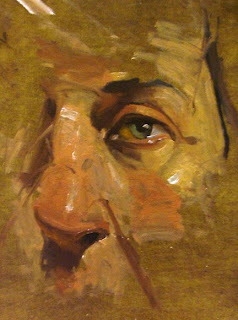 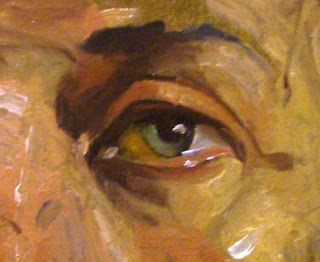 "Finishing is the stretch between the gaps...edges..." This was such a fascinating demo.

First of all Lefell had no model, this was all from memory.

He started with the dark area around the eye, He called this his yin and yang of the eye- "have lights mass and darks mass." His palette consisted of Burnt umber, ultra marine blue, pthalo blue, venetian red, cad orange, yellow ochre and white.

By painting the dark area first he established all the shadows, then, just like sculpting he began to add the mid values that create the lid and around the eyes. The skin under the eye is a warmer red. He connected the white of eye to the lower lid then went in later to add color to the white of the eye on the inside. It was almost orange in tone and I was waiting for him to "fix" it but it all came together. He talked about how to make the eyes transparent and how light will hit one side of the iris.

Regarding solving problems: Instead of softening a shadow transition he said instead, "to take their attention away or divert it to a light next to it."

"Highlights starts crisp and has a tail which (tapers off) and relates it to the surface."

"The dark part of the eyebrow starts under the brow ridge and has a grayer, cooler color by the bone because it is turning in."

"You use more color on the tip of the nose and less color to make it recede." Also by graying out the receding areas and areas that turn the face , you can get a better illusion of the modeling. The under planes are usually cooler.

"Part of closing up the gaps is making other areas stronger"

And more gems..... "Every form begins and ends. "When light hits, it starts..." "Hard edges follow soft edges" "A hard edge is closed, a soft edge is open"

It was a fantastic demo, later another artist, Letticia and I were in the lobby bar and Burton Silverman and his friends joined our table and I had the excellent opportunity to further discuss his process and his ideas on finishing a painting. 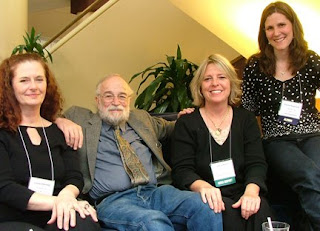 Saturday night was our Gala Celebration and black tie banquet. When they called my name, I was so proud and humbled to be among the 30 recipients of an Award and be among some of the finest artists in the country. They show your winning image on 3 huge screens in the banquet hall. The 1st prize went to a sculptor at our table, Amy Kann.

To see all the prize winners and the top portraits go to http://www.portraitsociety.org/ 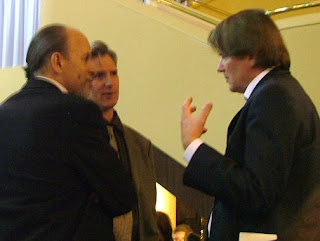 This is a bad picture, but I was still walking on clouds and couldn't hold still. Thats Daniel Graves on the left and Charles Cecil on the right.

Later that evening we again went to the lobby bar and Daniel Graves, founder/director of the Florence Academy of Art (the best place I ever studied) was there and also Charles Cecil Founder/director of Charles Cecil Studios. Both of them were honored for An Award of Excellence in Education for their incredible contribution to the studies of figurative art in a classical atelier. 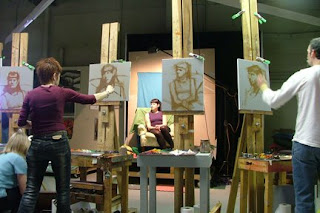 Nelson Shanks was another incredible speaker and talked about his work with Princess Diana and their friendship and his many other commissions of well known people. I was so exhausted I didn't take notes. Later we (800 of us) were invited to visit Nelson Shanks atelier/ Studio Incamminati. Where he teaches classical art in a 10,000 square foot space. They had a generous buffet prepared, a portrait demo by some of his teachers and the unveiling of Nelson Shank's latest work.

After that I ran to see the Cecilia Beaux, American Figure Painter exhibit at the Pennsylvania Academy of Fine Arts- incredible! I'm sure if she had been a man, her fame would have been as Sargents.

I highly recommend this conference for next year which will be held in Washington DC.

Posted by Cheryl Kline at 4:37 PM No comments: