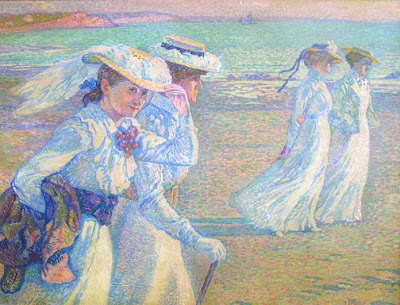 Painting Light is not just another Impressionist exhibition – it examines some of the most famous artists and their techniques of the last century, looking for clues as to where the paintings were made, under what conditions and, in some cases, by whom. The exhibition brings together over sixty masterpieces by Matisse, Van Gogh, Signac, Sisley, Berthe Morisot and Renoir and others from the Wallraf-Richartz Museum Foundation Corboud, Cologne, and other museums.
The exhibition opens by introducing the visitor to the turbulent world of the mid-19th century. Academic salon painters held the upper hand, but a new movement was afoot, and new theories of color were doing the rounds. Drawing inspiration from the theories of Goethe and Helmholz, scientists and painters alike were asking how they could capture ‘impressions’ – the fleeting perception of life as it happened – and put it down fresh and spontaneous on canvas. Here the visitor can compare the canvases of Jean Jacques Henner and other salon painters with the radical new style of Monet’s Maison à Failaise, brouillard (1885) and Caillebotte’s Le Coteau de Colombes (1884).
The Impressionists were not only pioneers in style, they were first and foremost innovators in technique. They were interested in "the new science." How the eye perceives light and assembles it optically. This interactive exhibition invites the visitor to look at the paintings using modern technology – with high-power microscopes, under infra-red and ultra-violet light – in order to discover the secrets of the Impressionist and Post-Impressionist artists. It explores such as aspects as how the artists conveyed the quality of light at different times of the day and which conditions inspired them the most, what materials and work methods they used, where the painting was done (for example one painting even has sand in the paint confirming it was executed en plein air while others recreated outdoor scenes in the shelter of their Paris studios) as well as the history of the paintings.
It was an eye-opening exhibit for me, being the realist snob that I am.

For more info go to: http://www.impressionismofirenze.it/
Painting by Theo Van Rysselberghe
Posted by Cheryl Kline at 8:48 AM No comments: